Kentucky Kernel – “The car flipped multiple times on State Street after UK football’s win over Florida is likely totaled and belongs to a 19-year-old, non-UK student.

Matt O’Hara found out his car had been damaged Saturday night when he saw Barstool UK’s tweet with a video of it being flipped.

O’Hara is from Independence, Kentucky, and was visiting friends who live on Crescent Avenue to watch the game. He said he was in the University Drive area after the game.

“I love BBN and all, but there’s a line people have to realize between burning a couch and damaging a car,” O’Hara said.”

O’Hara’s mother, who is identified only by her first name Amy on Twitter, has started a GoFundMe to raise money to replace O’Hara’s car.

I’ll try my best to put biased opinion aside of the simple people of Kentucky but no promises or guarantees I can do so.

This was a real POS move by Kentucky fans last Saturday after their 27-16 victory over Florida. I get it 31 years without a victory you’re happy, congrats, go celebrate you guys earned it. If I was coming off a 31 year dry spell I’m sure I’d be jumping for joy too but flipping cars? I don’t think so. Oh I guess I should explain what a dry spell is for you Kentuckians, it’s where someone is on a cold streak and hasn’t had sex. You folks wouldn’t know anything about that though since you can just go to a family reunion or the nearest barn to avoid the cold streak.

Are we shocked though that the folks in Kentucky are capable of such debauchery? I stumbled across an article from Onlyinyourstate.com listing the 10 dumbest criminals in Kentucky, I’ll list the ones you have to see to believe below.

“It was reported in Paducah on July 14th, 2011 that Nathan Johnson, then 28, was arrested for having intimate relations with a horse at Carson Park. The bestial intimicies were witnessed and reported instantly. Unfortunately, the records made clear this was not Johnson’s first horse ride.”  (See what I mean about Kentuckians never having to worry about a dry spell?)

“Hopkinsville police got a surprise mid June 2015. Christopher L. Stewart drove into the “do not enter” side of their lot, almost hitting a police cruiser. He then stepped out, telling the police he was ready to be arrested for DUI, and had consumed a pint before driving there. The officers also prevented Stewart from consuming a bottle of fuel injector cleaner during his arrest.”

“On Nov. 20, 2013, Reynolds was wanted for questioning in regards to burglaries. When police asked him to come into the station, he responded with, “Do your job, catch me if you can”. Needless to say, they caught him.”

“In November 2013 in Louisville, Cherell Gibson crashed her red Monte Carlo into a convenience store window, but was unharmed. She then snatched rolls of lottery tickets from the inside the window and left, thinking herself immune to the video cameras catching the entire event. She later went to another store with ALL her winnings and started cashing them all in. The amount won was not enough to cover legal fees from the incident.”

“This brilliant robber we’ll deem, “Duct Tape Bandit”, in Ashland decided he was going to rob Shamrock Liquors. He wrapped his face in duct tape (shown below), entered the establishment and made his demands. However, his demands were met by the owner with a bat, and he was subdued in the parking lot until police could arrive. After a photo shoot, they removed the duct tape, but Kazee claims no memory of the incident.”

“Two men decided to make a heavy withdrawal in the Bluegrass from a local ATM. They used a chain, attached it to their bumper, and attempted to jerk the front of the machine off its hinges. Instead, the Hercules-like strength of the ATM door held the truck in place, and pulled off the vehicle’s bumper. The two panicked men fled the scene, not thinking twice about the missing bumper… They likely assumed they’d simply pick up one cheap at a junk yard. The attached license plate on the bumper left behind was a different story though. I found this story repeatedly, but names and exact locations were excluded.”

“Michael Allen Cecil of Old Louisville got really hungry in June 2014. He was so hungry; he took his shotgun, set up a faux pizza delivery across from his own residence, and waited. When the pizzas arrived, he took ONLY the pizzas at gunpoint, and left the driver what cash he had. A crime worth 10-20 years for $51 worth of pizza…”

“Michael Baker has been mentioned before, but his April 2012 stupidity is legend, and worth mentioning again. This is the cunning soul that siphoned gas from a police cruiser in Jenkins KY. What earned him the “legend” title? He then had his girlfriend snap a selfie with him; gas can, siphoning hose, and police car, while he extended an inappropriate appendage. The image was later posted on Facebook and led to his arrest. His brilliance outshines the majority of those on this wall of shame.” 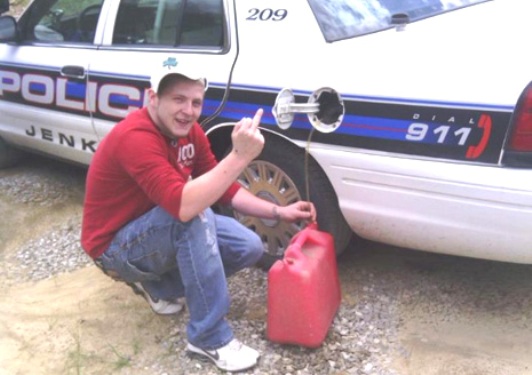 Lexington Herald Leader – “Given posted an update Monday on the GoFundMe to say that Big M Superstore in Nicholasville had donated a 2005 Mazda 3 to O’Hara.

“These guys are truly great Americans,” Given said in the post. “The kindness they showed to us is just amazing.”

Given said in the update that the family was discussing what to do with the funds that had already been raised on GoFundMe.”

It’s great to see the fine people in Nicholasville clean up the mess their neighbors north in Lexington made. To the owners of Big M Superstore we salute you, a real American hero.

To the people of Lexington who will probably continue flipping cars and wrapping themselves in duct tape and rob banks.